Geneva Taylor MA '17 found it challenging to lead a healing circle for African-Americans across a spectrum of ages and experiences at Emerald City Bible Fellowship in Seattle's Rainier Beach, but she did it because she has always embraced reconciliation work.

Sitting in her office across the street from the church, Taylor explains her role at the newly constructed Emerald City Commons, an affordable housing complex where she is resident coordinator for activities in the apartment’s common space. The building’s rooftop patio, common space, and ground-level fitness center and its clean lines of glass and concrete echo other modern, mixed-use developments burgeoning across Seattle.

Taylor, the daughter of a teacher and a social worker, was raised in Seattle’s south end. Growing up, she marched in protests and participated in activist programs. Still, she started an MBA degree at SPU, aiming for marketable skills over an activist’s vocation, before she discovered the seminary’s master of arts in reconciliation and intercultural studies.

“I wasn’t aware that SPU would bring me back to myself. I didn’t know that reconciliation work was something to be done in the church,” says Taylor. “For SPU professors to say, ‘This is a part of our faith’ — I think that’s what SPU has done for me the most.”

In 2004, SPU signaled institutional support for reconciliation by co-founding with evangelical civil rights leader John Perkins co-founded the John Perkins Center for Reconciliation, Leadership Training, and Community Development. In 2008, the University started a reconciliation studies program. As national events highlight the importance and difficulty of reconciliation, especially around race, Seattle Pacific students and faculty tackle the challenges in communities on and off campus.

Within the reconciliation and intercultural studies program — one of only a few in the country — students and faculty work to define “reconciliation.”

“Police violence and profiling have been true forever, but they’ve become part of the consciousness of white people due to African-American activism. Faithful Christian white people were able, in our privilege, to not see it, but there’s been a tangible change since about 2014.” —Doug Strong

“It’s bigger, deeper, and more difficult than what our language, and our soundbite-oriented culture, can capture,” says David Leong, who teaches missiology at SPU and recently published a book on urban geography and reconciliation. “We’re talking about the most profound theological phenomenon, but also the deepest human pain and dysfunction.” Reconciliation builds bridges between communities of privilege and communities of less privilege. Privilege can be conferred by race, gender, class, disability, or sexual orientation. But Leong says race presents a particularly important and challenging divide in the U.S.

“Racism and racialization … mark our collective identities in the U.S. more deeply than we’d like to admit,” he says. “It’s about much more than personal prejudice or bias, and only when we reckon with how deeply racialization has shaped our world can we begin to uncover the truth about our lives together.”

The 2014 shooting of Michael Brown by a police officer in Ferguson, Missouri, reignited a lament-filled discussion on racism at Seattle Pacific.

After the shooting, the School of Theology hosted an ecumenical worship service with the John Perkins Center and the Office of University Ministries. It also prompted student activism around the topic of race on SPU’s campus. In 2017, inspired in part by that activism, Seattle Pacific hired Sandra Mayo as its first vice president for diversity, equity, and inclusion and introduced new undergraduate course requirements around cultural understanding.

“Police violence and profiling have been true forever,” says Doug Strong, dean of the School of Theology. “But they’ve become part of the consciousness of white people due to African-American activism. Faithful Christian white people were able, in our privilege, to not see it, but there’s been a tangible change since about 2014.”

After racially motivated violence erupted at a far-right rally in Charlottesville last summer, theology faculty published a statement they had written in 2014 for the SPU community. It’s important, Leong points out, for institutions to speak up about their values.

“Justice, and its inextricable attachment to righteousness, is at the center of Christian discipleship — a lived faith in the real world, not an abstract set of beliefs.” —David Leong

“Many are wondering if Christianity in general and the church in particular has anything to say about our nation’s historic entanglement with pervasive racial injustices,” he says.

The faculty signed the statement unanimously and posted it online, where faculty at four other Free Methodist schools asked to sign. For Seattle Pacific faculty, the statement signaled an institutional awareness of race.

“We still see ourselves as evangelical, and people in that camp infamously voted for Trump. For us to take a different perspective than those puts us in the minority,” Strong says. “We’re saying, ‘Well, we want our constituency to be people who are waking up to this.’”

But reconciliation cannot stop with a statement, says Taylor. One of the challenges is identifying one’s own biases, and that’s hard to do no matter a person’s race or ethnicity.

“As so many truth and reconciliation commissions have taught us, there can be no reconciliation until we have told the truth, however painful and difficult it may be to face,” says Leong.

Many people in underprivileged communities worry so much about basic needs like paying a light bill or saving for children’s education that relationship-building seems out of reach. This is true for many in Seattle, where housing and other living expenses are rising, pushing communities, including some of Taylor’s relatives, to other areas around Seattle.

This is why reconciliation needs holistic justice, says Leong.

“I often tell students that justice is like a garment — a fabric of many threads woven together by God for the wholenessand flourishing of all creation,” he says.

That means justice should tackle topics like gentrification, a neighborhood rejuvenation process that accompanies an influx of middle- or upper-class residents and often displaces poorer residents, says Leong. A number of Seattle neighborhoods south of downtown have gentrified since the 1990s, according to census data collected by Governing magazine. Across the metro area, those neighborhoods saw some of the biggest increases in average home values and number of people with advanced degrees.

“Justice, and its inextricable attachment to righteousness, is at the center of Christian discipleship — a lived faith in the real world, not an abstract set of beliefs,” says Leong.

That’s where Emerald City Commons comes in. Emerald City Bible Fellowship runs the program through Urban Impact, a community development ministry founded in 1987 to address challenges of poverty in city spaces. Taylor organizes after-school activities and tutoring for residents. Students have diverse backgrounds — they include East Africans, Asians, African-Americans, and Caucasians. Tutors come from nearby organizations, including SPU.

Taylor views the building as a bridge where church members meet people in the neighborhood and have “togetherness” without being “saviors.” She hosted a knitting event that drew East African women and white women from Bellevue and Redmond.

Haskins, who grew up in Spanaway and Tacoma, heard about the reconciliation program from past seminary director Billy Vo. “I wouldn’t be here if that wasn’t part of the program,” he says. “It’s been on my heart for a long time — how do you truly build a multicultural church, understanding yourselves theologically and understanding cultural context?”

At Churchome, Haskins works to broaden theological understanding of reconciliation among congregants, many of whom are upper-class and white. This includes sermons and Sunday school messages about reconciliation, and celebrations of African-American history month.

It’s all about shaping church culture — “valuing cultural differences and recognizing who others are in Christ,” he says. “How can people from South Seattle not feel like they have to act white to be in our church?”

In 2011, Brenda Salter McNeil, who worked for InterVarsity Christian Fellowship, joined SPU’s faculty as an associate professor of reconciliation studies. She has written three books and consulted for 30 years on reconciliation at universities, organizations, and denominations.

One of her key teaching moments comes during the capstone class for the undergraduate reconciliation minor. She, John Perkins Center Director Tali Hairston, and John Perkins Center events coordinator Caenisha Warren pack all the students in a van for an “exegesis of the city.”

The students examine Seattle neighborhoods carefully to ask how they got that way. The goal is to consider the harm ministries can cause by unintentionally aligning with processes they don’t understand, like gentrification.

McNeil visited King Donuts, a combination donut shop, laundromat, and teriyaki restaurant in Rainier Beach, in the SPU van. The owner had recently been attacked and injured in a break-in. The neighborhood started a GoFundMe account to pay for her medical expenses, and basketball player Jamal Crawford, who had played for Rainier Beach High School and played for the Los Angeles Clippers at the time, heard about the incident and sent her a signed jersey. When the students visited, the jersey was hanging from the shop’s ceiling, a symbol of community-powered restoration.

For McNeil, the story illustrates how people with privilege can enter spaces of suffering. Borrowing a phrase from her colleague, Hairston, she says it is the work of all reconcilers to “help desecrated spaces become consecrated spaces.” 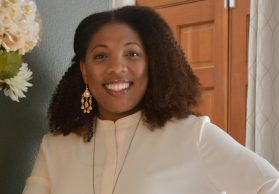 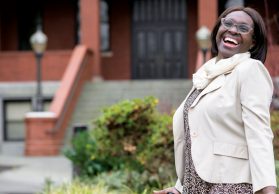