IT WAS AN ODD SORT OF HOBBY: For a year and a half, BECKA MAGNENAT ’14 attended every Seattle City Council meeting focused on the future of the city’s civic arena, once known as KeyArena. An upgraded complex was the linchpin to lure professional sports teams to the city. Taking time off work, Magnenat would listen to hours of deliberation, work the room, pore over hundreds of pages of documents setting the terms of the arena redevelopment, all in pursuit of one goal: be a part of the next big thing in Seattle sports.

SEATTLE KRAKEN is the first National Hockey League franchise in the city’s history and the next big thing. In 2018, Magnenat realized her career goal when she was hired by the team and quickly ascended to marketing manager. 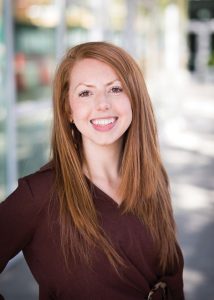 Magnenat steers the club’s engagement with fans — originally big, in-person events but currently digital gatherings due to COVID-19 — and leads marketing campaigns and email communications. Once the team starts playing in fall 2021 in the newly renovated and renamed Climate Pledge Arena, she’ll have plenty of game-day responsibilities.

But Magnenat is quick to admit that filling the arena’s 17,100 seats is the easiest part of her job.

“Thirty-two thousand depositors put down money for season tickets — 25,000 in the first hour. They just had faith,” she said. “Now we have over 66,000 people on our waitlist to get season tickets.”

Her larger goal is ensuring that fans want to be an active part of the Kraken brand.

“There was something in me at a young age that was just determined to work in sports. I feel like it’s been a calling for me.” — BECKA MAGNENAT

“If they can’t make it to a game at the arena, are fans going to bars to watch it? Are they watching it at home? Are they introducing their kids to the sport?” she asked. “How do we introduce people to the sport of hockey who might be new to it, and how do we build our brand affinity for people outside of our season ticket base?”

Magnenat is tenacious in her career goals.

“There was something in me at a young age that was just determined to work in sports,” she said. “I feel like it’s been a calling for me. I haven’t always known what that was going to look like, but it was just something that I’ve always felt very deeply.”

Magnenat, a communications major with a journalism emphasis, thought she might become a sports broadcaster. She began college in Costa Mesa, California, but she missed Seattle and transferred to SPU as a junior. She was a sports writer for The Falcon, and though she soon realized there were roles for women in professional sports beyond broadcasting, her journalism skills have proven valuable.

“A good writer learns to be very detail-oriented, and that has been very important in all of my jobs,” Magnenat said.

As a college student, she heavily utilized SPU’s Career Center where she honed her résumé and learned to make professional connections. “I tried to figure out how could I be in the right place at the right time to build my network and experience,” she said.

Magnenat worked at several jobs and pursued internships during her time at SPU. Her networking led to an introduction to longtime Seattle sports broadcaster Tony Ventrella.

“Tony took me under his wing and let me job shadow him, and he helped me land a job working in the kitchen at the Seahawks training facility during training camp in 2013,” said Magnenat, who served meals to coaches, players, and front office staff, and observed the wide variety of roles within the organization.

She knew that doing her job well — even though cleaning up spilled smoothies and chopping vegetables was unglamorous — would earn her the staff’s trust. That kitchen job and her tenacity landed her a role right out of college as a community outreach intern with the Seahawks in 2014.

Her yearlong internship focused on supporting the team’s charitable initiatives, including the NFL’s Play 60 Tuesday program where she took the club’s mascot and a player to visit elementary schools with positive messages about healthy habits and teamwork. She coordinated donation requests and the team’s involvement in fundraisers for local hospitals and projects for area homeless shelters, as well as game-day duties with community groups.

Of course, the Seahawks 12-4 record that season and a trip to the big game contributed to the job’s fun factor. “The playoffs and going to the Super Bowl that season were definitely a big career moment for me,” she said.

After Magnenat’s internship ended, she continued to work for the team on game days for two more years, hosting groups like the Make-A-Wish Foundation, military veterans, and Seahawks alumni.

“It was kind of my Business 101. I just learned so much there about international business, business development, working with influencers and brands, how to launch a product, how to do a soft launch, and key performance indicators,” she said.

Though the company wasn’t ultimately successful, it revealed to Magnenat how much she enjoyed the startup culture of building a company and wearing many different hats.

“My career took some twists and turns but I always had my long-term goal in mind: How do I build my network, and what kind of experience can I get so that I’m qualified for when there is an opportunity to get back in sports?” she said.

A connection with the former general counsel for the Seahawks eventually led to an introduction to the Kraken’s vice president of marketing. They shared a background in professional sports organizations and startups in Seattle, and the vice president soon contacted Magnenat about a newly created position with the team.

Though professional sports administration has a reputation for being male-dominated, Magnenat isn’t one to back down from challenges.

“I’m someone who loves playing sports. I’m competitive, and it brings me so much life,” said Magnenat, who was a three-sport athlete in high school. “If I see a group of guys playing some pickup basketball, I’m like, ‘Game on. Let’s do it.’ I might be short, but I can hold my own.” 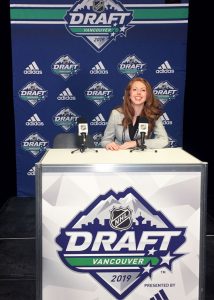 Kraken CEO Tod Leiweke organized a “training camp” for his staff, giving Magnenat and others in the front office an opportunity to get out on the ice and learn to skate and play hockey.

“That’s how I got my first taste. I was hooked, and I wanted to continue playing,” she said.

She joined a three-on-three “pond hockey” rec league with coworkers. She’s almost always the only woman playing, not just on her team, but on the ice.

Fortunately, that hasn’t been her experience at work. “For the Kraken as an organization, representing diverse voices is a really core part of who we are,” she said. “A big part of that is women, and close to half of our VPs are women.”

The Kraken Foundation is focused on increasing access for underrepresented youth to play hockey, and the team has also committed $10 million over 20 years to support YouthCare, a local nonprofit dedicated to eradicating youth homelessness.

Climate Pledge Arena at the Seattle Center opens in the fall, ushering in the Kraken’s inaugural season.

“It will be fun to see how having a team will hopefully shape multiple generations of people who grow up loving hockey,” Magnenat said. “The history of hockey in Seattle is definitely a checkered past. There are rich traditions here of hockey that have come and gone, but the Kraken are here to stay.” 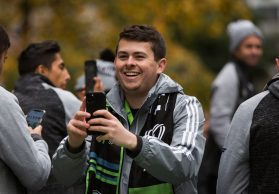 "Being Social" with Danny Ciaccio