The internationally renowned professor, pastor, and author of The Urban Christian and A Theology as Big as the City, made it his lifelong mission to call Christians to live out their faith in cities.

Armed with a history degree from Seattle Pacific College, a master of divinity from Trinity Evangelical Divinity School, and a doctorate in ministry from McCormick Theological Seminary, Bakke was devoted to racial equality and urban ministry.

Bakke pastored inner-city churches and taught at Trinity College and McCormick Theological Seminary in the ’70s. While working on his doctorate, he also co-founded a seminary track for urban pastoral education.

During the ’80s, Bakke taught at Northern Baptist Theological Seminary in Chicago and worked to end redlining practices in inner cities, which denied hundreds of families access to housing because of racial bias. Bakke founded International Urban Associates in 1989, a network of urban-based church and mission leaders in many of the largest cities of the world.

Bakke was professor of Global Urban Ministry at Eastern Baptist Theological Seminary in Philadelphia from 1990 to 2001. And he helped found Bakke Graduate University, which offered courses on applying theology to urban migration trends and the growth of major cities.

The graduate school, which offered doctoral and master degree programs throughout the world, required students to travel to other continents as
part of the program. Bakke was a professor and chancellor there until he retired in 2011.

“As counterintuitive as it may seem in this exploding urban world, I have learned that the larger and more densely populated that cities become, the more we must be with the people we serve, [and] the more our ministries must be intentionally relational,” Bakke wrote in Response in 2011.

“The world has come to our cities. And the world is nothing more than people, people who need our friendship, our caring, and the good news we have to tell about God’s redeeming love.”

Bakke was preceded in death by his wife, Corean Bakke (2021); son Brian Davis (2018); and daughter, Robyn (1965). Bakke is survived by sons Woody and Brian, two grandchildren, and two great-grandchildren. 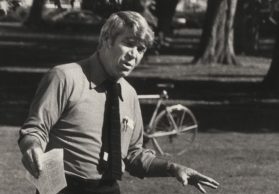 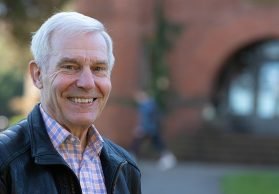