At 6 a.m. on a July morning, Brandi Williamson ’06 is stepping into what strongly resembles a rock-climbing harness outside her home in Montana’s Bitterroot Valley. She tries to ignore the chorus of barks and howls from eight of her Siberian huskies in their kennel as she secures a harness around Buck, one of her strongest and fastest dogs. These morning runs with Buck are routine, but Williamson still feels sad leaving her other dogs behind.

The temperature is in the 50s as she connects the 7-foot leash from her waist to Buck’s harness. Williamson prefers freezing temperatures, but this will do.

Williamson and Buck set off running at a fast clip, Buck pulling hard as Williamson’s 6-foot frame bounds directly behind him. This is the sport of canicross, and Williamson is one of the top women in the country competing in the sport.

Williamson has always loved running. In 2000, she was Washington’s 4A state cross country champion.

“She was a very outstanding athlete. She was fun to coach. She was a hard worker, and she was a very good student,” Doris said. “Brandi was the kind of person you wanted to have on a team.”

Williamson enrolled as a biology major at Seattle Pacific, so she split her time between the lab and the outdoors.

“Going to SPU was one of the best decisions I made,” Williamson said. “The classes were amazing. The scientific track at SPU really set me up well for where I’m at now. The small feel [of the school] and the support you get from the professors and staff really meant a lot.”

After graduating from SPU, Williamson went on to earn her master’s degree in public health at the University of California at Berkeley before moving to Montana. Today, she works as a laboratory technician at Rocky Mountain Laboratories in Hamilton where she studies viruses, including the Sin Nombre virus, carried by deer mice, that can cause a fatal respiratory disease in humans.

“I definitely like canicross … It’s just a perfect combination of these two great passions of dog-powered sports and running.” —Brandi Williamson

One of her career highlights was successfully tracking the source of a relapsing fever case to a spirochete in the ticks and rodents on the infected man’s property.

Her work has also extended beyond Montana’s big skies and taken her to West Africa. When Liberia was experiencing an Ebola outbreak, Williamson traveled there to study the virus. Two years ago, she traveled to Mali to aid in disease diagnosis.

But Montana has her heart. The summer before starting her research job, Williamson was fighting fires in Montana when she met and fell in love with her husband, Cobey, as well as his dogs — three huskies, at the time.

The couple married and moved to their current home in Corvallis, in the southwestern part of Montana. And then Williamson went out and tried dog sledding for the first time.

“Cobey said he could see my grin from a mile away, and he knew that we were in for it,” she said.

“You’re a team and you’re working together toward this one goal. It’s something special.” —Brandi Williamson

Today, the Williamsons own nine huskies. They started training them for longer races. The goal was Montana’s 350-mile Race to the Sky. The couple even named one of their two sons Rohn, after one of the stops along the race.

“It’s exciting to see the dogs do what they were bred to do, what they love to do. It’s great exercise for the dogs,” she said. Plus, she loves the contrast of the activity.

Before the race, her dogs have so much pent-up energy. As soon as they take off, everything is quiet except for the panting of the dogs and the sled gliding through the snow. “I really like dog-powered sports because it’s simultaneously exhilarating and relaxing,” Williamson said.

But when the amount of training became too stressful on their family, Williamson switched to shorter sprints, four to eight miles, depending on the number of dogs pulling at one time. Eventually, mushing — dog-powered transportation by cart or sled — drew her into canicross.

“I originally thought I had invented canicross,” she said. “I’ve always been a runner and these guys like to run, and so in the off-season, I thought, ‘Well, I’m gonna take them running,’ and I would get frustrated because they always wanted to pull.”

She started attaching the dogs to a harness and leash around her waist, running that way for about seven years before realizing she could race competitively this way. Williamson ran her first canicross race in 2017 in Spokane, Washington and was hooked.

To compete on an international level in canicross, a selection committee approves applicants for the U.S. national team based on past performances at various canicross races and other criteria.

In October 2019, Williamson was one of three women to represent Team USA at the International Federation of Sleddog Sports Dryland World Championships in Sweden.

“I’m honored that I was selected for the team to represent the U.S. and show how well the U.S. can do at the world championships,” Williams said.

“It’s neat to run with a dog because it can almost help you get your mind off the pain when you’re really pushing hard, because you’re just mesmerized by how beautiful it is to watch them run,” Williamson said. “You’re a team, and you’re working together toward this one goal. It’s something special.” 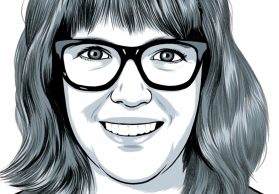 From the Editor, Autumn 2019: Inspired by you, from editor to professor