Growing up, the dean of SPU’s School of Education wanted to be anything but a teacher

“I thought that I didn’t want to be a teacher,” said Nyaradzo Mvududu, dressed comfortably in a maroon sweatshirt and workout pants, relaxing for a moment on the couch in her Peterson Hall office. As a student in Zimbabwe, Mvududu had steered away from becoming an educator. “When you are in your last two years in high school in Zimbabwe, you almost declare your major,” she said. “I did physics, chemistry, and math. And French — in case I met a French man.” Her smile turns into a laugh.

It was a busy morning for Mvududu, who serves as the dean of SPU’s School of Education with its 27-member faculty and 15 staff, 68 undergraduates, and 355 graduate students. Mvududu also teaches statistics virtually due to COVID-19, chairs dissertation committees, and, on this particular morning, was filling in as caregiver for her 6-year-old grandson, Quincy, whose babysitter had an unexpected doctor’s appointment.

None of it appeared to faze her. Her secret: blasting the music of her favorite Zimbabwean a cappella gospel group, Shower Power, on the drive to campus. “I love their messages. There is a song I can find for whatever. Music is my thin place,” she said, referencing where the liminal space separating heaven and earth grows thin.

Growing up in Africa

Born in Gwanda, a small town in southern Zimbabwe, Mvududu grew up in a family of educators. Her father was a teacher and an administrator. Her mother was an elementary school teacher. “She just loved it. She assumed everybody else loved it, too,” Mvududu said. “She would always volunteer me to work with the second graders, except it wasn’t my thing.”

Until Mvududu’s last three years of high school, schools in Zimbabwe were racially segregated. Black schools had three times as many students in the classroom as their white counterparts. White schools were well funded. Mvududu remembers what that looked like for Black students. “The kids were preparing to write their O Level exams [in chemistry],” she said. O Levels are national standardized exams taken at the end of one’s secondary education. “They had never seen a test tube. Students should not fail because they didn’t have the same opportunities.”

Her father was able to put his children into private boarding schools because he’d won a lottery drawing in Zimbabwe. “I don’t have cows to leave you,” Mvududu’s father told his kids. “Education is your inheritance.”

“From a very early age, we knew that education would open doors,” Mvududu said.

“Students should not fail because they didn’t have the same opportunities.”

After earning a bachelor’s degree in business studies at the University of Zimbabwe, Mvududu took an accounting job, thinking she’d earn more than a teacher. She found the job boring but on Thursdays, she taught a statistics class to adults — businesspeople working on their diplomas. “My husband said, ‘You know, Thursday is the only day you don’t want to bite my head off when I ask about your day,’” she laughed. Teaching kids might not have been her thing, but instructing adults was rewarding.

She applied to MBA programs in South Africa and Europe, not because she had a clear plan of what she wanted to do, but because it seemed like the natural next step after an undergrad degree in business. Wherever she was accepted, the funding always fell through. She was about to give up when a friend recommended the University of Washington, where she was eventually accepted.

Mvududu moved to Seattle in 1993 with her little boy, Fungai, leaving her husband, Jonathan, behind until he could join her. (Jonathan is Zimbabwean, not French.) After she completed her MBA, she decided to learn more about education so she could teach in a school of business. “Once I started taking education courses [at SPU], I knew I was home,” she said.

A teacher is born

Mvududu found SPU remarkable in every way. “The professors were part of it, but it was the whole environment. People would meet me [on campus] and say, ‘I hear you are doing really well in your classes.’ It’s one of the things we pride ourselves in at SPU — knowing our students.” In 2002, Mvududu received her doctorate in education.

One day the dean called and asked if she could teach a statistics course. “People don’t look forward to taking that course,” she said. “When you teach a subject that people don’t want to be there for, you have to think of different ways of teaching so you can reach them.”

“I use humor. I use music. We sing. With the undergrads, we would dance,” she said. By Friday, she noticed students were always weary. “Out of desperation, I said, ‘Everybody get up. We are going to dance.’” That’s when she announced she was a licensed Zumba instructor. Dancing and singing helped her students beat those Friday blues. Mvududu became a faculty member in 2003 and received tenure in 2010.

Using lessons from her life

In 2018, Mvududu became dean of the School of Education and was given the opportunity to oversee a team of dedicated professionals with her faculty and staff. “They are the most caring people for each other and for the students,” she said.

Mvududu sets a high standard for SPU graduates. “We want people who are competent. We want servants who can be leaders, and we want people who have character,” Mvududu said. “The School of Education is focused on training future teachers who can work with students from across a spectrum of socioeconomic backgrounds and cultures.”

“It’s a moral obligation to me to think about access to education for all students.”

In public schools, the student body is diverse, but the teaching profession generally isn’t. “[They are] 80% white, middle class, and female,” Mvududu said of the candidates training to be teachers, while the students they teach come from a variety of different backgrounds. “It’s a moral obligation to me to think about access to education for all students. It’s about social justice.” Programs, such as the Holly and Edgar Martinez Fellows, provide opportunities to attract a more diverse group of people into the teaching profession.

This year, SPU’s School of Education turns 100. “I looked at some old pictures the library had and thought, Things may have looked different, but we share common values. Going forward, I see us keeping the same values but doing things differently,” Mvududu said.

“We will continue to be innovative, agile, responsive to the landscape of the time. We will keep our focus on social justice with an emphasis on access, in all the meanings of that word,” said Mvududu, who personally knows the importance of providing students of all backgrounds access to a quality education. “[SPU] will continue to play a significant role in diversifying the education field of teachers, administrators, and school counselors.” 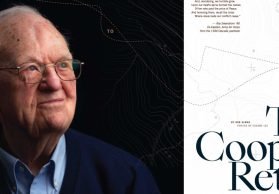 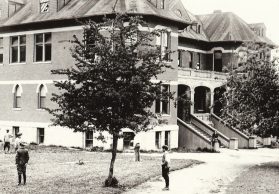