Inside Voices 2: Meet the Producer with Kyle Brown

In this episode of Inside Voices, meet Seattle Pacific University alumnus Kyle Brown '15, producer of the SPU Voices Podcast, as he shares his student journey and beyond at Seattle Pacific. After earning a degree in communications, Brown landed his first post-college job at Seattle Pacific but shortly after faced an unexpected health challenge that taught him about the benefit of having a supportive workplace.

Amanda: This is the SPU Voices Podcast. I’m Amanda Stubbert. Welcome to our next episode of Inside Voices, where we bring you stories of students, faculty, staff, and guest speakers right here on campus. And today we don’t even have to go outside of our studio, because we’re interviewing my producer, Kyle Brown.

Amanda: You might remember his “Hi, I’m Kyle” from our regular SPU Voices Podcast.

Kyle Brown: It’s my big break. It’s what I bring to the table.

Amanda: So why don’t you talk to us about how you came to SPU, Kyle.

Kyle Brown: So I came SPU because someone came and visited from SPU, from the admissions office, Tyler Gorsline, and he sold SPU to me. I’m from the Portland area. I knew I wanted to get away from my family for awhile, close enough that I could visit for Christmas and holidays, but far enough away that I wouldn’t go home on the weekends.

Amanda: Can we just say that I also grew up in the Portland area, and that is another reason I came to school at Seattle? All the things you just said: I need a minute, family. [crosstalk 00:01:13]. I need a minute.

Kyle Brown: Yeah. So I came up here for that. I didn’t know what I wanted to study at all and that was another benefit of going to SPU: I was able to experience all of those different programs, without having to commit to something right away.

Amanda: And you did experiment. You studied and experienced a lot of different things at SPU. You want to give us a little rundown.

Kyle Brown: So yes, I did a lot of different things at SPU. I was here on a theatre scholarship. I’m not trying to impress you guys, but I am a multiple-time intramural champion. I was a student ministry coordinator, also in Emerson, I was an RA in the Falcon Apartments, and I worked for three years for the Admissions Office while I was a student before I ended up coming back as a staff member.

Amanda: Wait a minute. Who was your boss when you worked in Admissions?

Kyle Brown: It was you.

Kyle Brown: I can’t get away.

Amanda: Can we talk about your first day of work [for Admissions]?

Kyle Brown: Yeah. So we did the tradition for SMCs and Emerson, which is you had to wear a cape that year. So everyone was given a cape and mine was literally the cape from Lord of the Rings, that Frodo wears, but I also had broken my toe. So I was in a walking boot, and I was wearing a cape on the first day of work.

Amanda: And I think you’d gone all summer without a haircut, if I remember correctly.

“So I was in a walking boot, and I was wearing a cape on the first day of work.”

Kyle Brown: That was just pretty typical at that time. It’s just really long hair. Yeah, it was a good start. I was never super fashion-conscious in school or really now, so I was fine with it. I wasn’t too worried about it. I didn’t even think that it was weird, until I sat down and realized, this is like work. This is a real work environment.

Amanda: Maybe I shouldn’t have worn my cape to work.

Kyle Brown: This is a real work environment and I’m meeting my boss for the first time, but I already had the job. It wasn’t like an interview. So I was already doing it, so that’s probably why that didn’t cross my mind. I also couldn’t really wear pants. I had to wear shorts all the time, because of the walking boot. It was also springtime, so shorts 24/7.

Amanda: Which is also the rest of your life.

Kyle Brown: Yeah. It’s pretty much what I wear now, too.

Amanda: So what got you interested in producing and working on videos and podcasts?

Kyle Brown: So when I was growing up, there were a lot of TV shows out that were people doing pranks or physical comedy. And so my friends and I really liked that in seventh and eighth grade. And so we tried to make our own and so I learned how to edit or started learning how to edit through that, and really got the bug for it.

And then as I got into school at SPU, I just had more and more opportunities to do small editing projects in class. I was a communications major, so a lot of the time you had the option to maybe do a video, instead of a paper speech, and I preferred that.

Amanda: But you could be doing video and audio editing anywhere, but there was a pretty life-changing experience that happened to you while you were working at SPU [in Alumni, Parent, and Family Relations]. And I think that’s part of the reason you stayed. Why don’t you tell us about that?

Kyle Brown: Yeah. So I started working at SPU in October 2016 and two months later, my lower back started hurting really bad, so I went in to get it checked out. It’s like, I went from being a tour guide, walking all the time, to sitting down. It’s probably just a slipped disc, and that’s what they thought, too. So did an MRI. They didn’t see anything, and they were really confused. So they’re like OK, let’s do another couple MRIs. And eventually, after seven MRIs, they…

Kyle Brown: Seven MRIs. Luckily, it’s so fun to be in that machine.

Amanda: And so cheap.

“Seven MRIs. Luckily, it’s so fun to be in that machine.”

Kyle Brown: Yeah. Luckily, I had the SPU insurance to help with that, as well, but seven MRIs, they found that I had something called a Chiari malformation, which is an indent at the base of your skull, that your spinal cord fills into and it slowly starts stopping the flow of spinal fluid and it forms a pocket of air. And if the pocket of air starts going down your spine, it will burst and you’ll be paralyzed from below that point.

So luckily they caught it early. A lot of people who have the Chiari malformation, it’s small enough that they don’t need to do anything about it, it won’t form anything. You’re just born with it, but mine was five millimeters, which apparently is huge for Chiari malformation. And so they-

Amanda: You’ve always been an overachiever.

Kyle Brown: Yeah. I’ve always going for it, so I had to get surgery on it. So it was a yearlong process of figuring out what it was and then deciding what to do about it. And then finally when I went and saw a specialist who specializes in essentially your skull, she said, “We need to do this like next week.” I started SPU October 16, 2016. My surgery was October 16, 2017, so exactly a year later I had surgery.

And so what happened was, they take out the bottom of your skull and replace it with a skull that’s normal. I’m waiting on the superpowers that are going to come from the surgery, hasn’t quite happened yet, but basically throughout the process I was really supported at SPU. I was missing quite a bit of work to have to go get MRIs all the time. I was able to change my schedule up, so that I was working full time, so that I could schedule everything on those days that I had off.

They check on me every 6 months or so. I have to go in and get an MRI. And all the spinal fluid is flowing normally, there’s not the bunch up anymore and the air pocket that was starting to form has gone away. So yeah, I’m healthy, it’s not something I have to worry about anymore, which is really nice.

SPU really partnered with me and was like, “Hey, we’re here for you. I know you’ve only been here as a worker for one year, but you’re part of the family.” Throughout the process, everyone was really nice. Everyone was like, “Hey, how are you doing?” Like our VP, who I barely knew at the time and was terrified of, because she’s like an authority figure, was like asking me questions about it and was like really invested. Like, “I’m so sorry that this is happening to you. Is there any way we can be helpful?”

People brought me meals after the surgery and so just having that community around me in this hard time was great. Super beneficial for me and just, I was the youngest person in the office, I knew nothing about life. I still really know nothing about life, but I was getting [crosstalk 00:08:02].

Amanda: … Showed up on his first day in a cape.

Kyle Brown: Yeah. I was 23 getting the surgery, didn’t know I mean anything about anything. So I was asking people all sorts of questions about how do I use insurance? Just like questions and people were super supportive, coming alongside. And that’s just been both mine and my wife’s experience at SPU, has been people coming up next to you saying, “Hey, we’re in this together. We got you.” And just being super supportive, it’s become a second family.

Amanda: That’s fantastic. Well, we’re glad to have you as part of our family here at SPU, Kyle, and hope you’re going to stay a lot longer. We hope you liked today’s interview and learned something along the way from Amanda and Kyle. We ask you to rate, review, and subscribe, so we can keep bringing you these personal stories with universal impact. See you soon. 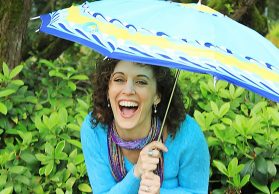 Inside the Voices podcast with Amanda Stubbert 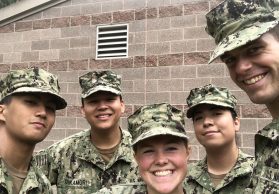 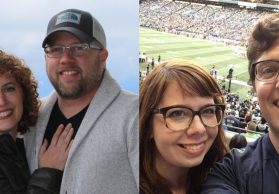 Inside (Our House) Voices: "SPU Stories" with the Browns and the Stubberts 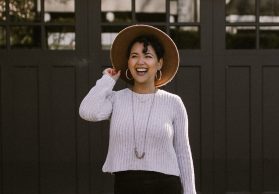