From the archives, Spring 2019: Can you guess this professor’s name?

Many well-known and well-loved faculty members and staff have devoted decades of their lives to Seattle Pacific and its students.

They include Professor of Psychology Philip Ashton, coach and Athletic Director Ken Foreman, cross-country coach Doris Heritage, and Professor of Classical Languages Winifred Weter. Some of the longest-serving faculty members in Seattle Pacific’s history are retiring this year, including Frank Spina. Professor Emeritus of Physics, Mathematics, and Computer Science Karl Krienke, who died in December, was another long-serving faculty member.

Another long-serving faculty member was this professor of engineering, who taught from 1960 to 2003. Did you take a class from him or see him around the Miller Science Learning Center (now Otto Miller Hall)? Send an email to response@spu.edu by June 15, 2019, to tell us who this loyal teacher is. We’ll enter the correct answers in a drawing to win an SPU sweatshirt!

Congratulations to graduate student Melissa McRoberts, who correctly guessed the decades for the different SPU wordmarks shown in last issue and won a sweatshirt for her guess. Wordmark A was from 1976; wordmark B was from 2002; and wordmark C was from 1989. 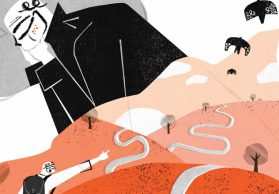