HUBERT NEWTON ’46 is looking forward to celebrating his 100th birthday in March. His mother was LOIS T. NEWTON 1915, a member of Seattle Pacific College’s first graduating class. After Huby graduated from SPC (where he was student body president), he attended New York Biblical Seminary and married Marie Brooks, with whom he had three sons. (Marie’s brother, DAVID BROOKS ’58, was an SPU emeritus professor of mathematics). Huby served as a Presbyterian minister in Pennsylvania, Washington, and Oregon. He later became an award-winning life insurance salesman. He was a member of Kiwanis for 50 years and co-founded a Kiwanis program that has raised millions of dollars for physician fellowships at Doernbecher Children’s Hospital in Portland, Oregon. In retirement, Huby has served as a guest minister in local churches. He talks with fondness and pride about his college days at SPC. He currently lives in Portland and has eight grandchildren and five great-grandchildren.

JACK DORSEY ’66, a renowned Northwest watercolorist, turned 81 in March. In honor of his birthday, Sunnyshore Studio on Camano Island, Washington, hosted a solo show, titled “No. 81,” featuring 81 of his original paintings. Jack sold paintings to pay his way through Seattle Pacific College. His work has been featured at Seattle-area museums and art festivals and in galleries as far away as Tokyo. In addition to watercolor, Jack paints in oil, acrylic, and egg tempura. He and his wife, Ann, live on Camano Island.

KAREN STRAND WINSLOW ’74, professor and chair of the Department of Biblical and Theological Studies at Azusa Pacific University in Azusa, California, received the Rose Liegler Graduate Scholarly  Achievement Award for excellence in research. She taught in the SPU School of Theology (then School of Religion) from 1987 to 1999. She and her husband, Dale, call Upland, California, home.

DAVID HICKS ’77 is chaplain of Warm Beach Senior Community in Stanwood, Washington. David is an ordained pastor in the Free Methodist Church. He and his wife, JANET WILSON HICKS ’79, live in Snohomish, Washington. They have two daughters, Brianne and KELLIE HICKS LEWIS ’08 (married to ALEXANDER LEWIS ’08), and two grandchildren.

JIMMY HURD ’77 spoke to Seattle’s University Sunrise Rotary Club on “Understanding Race and Racism” in April. Jimmy has served as a hospital administrator and as a Churches of Christ minister, serving
congregations in Washington, Michigan, and California. He was previously a diversity instructor for the Red Cross and Boeing Co. He and his wife of 42 years, Jacqui, have two children and two grandchildren.

VIRGINIA FARLEY ’80 is a senior civil engineer at California’s San Jose-Santa Clara Regional Wastewater Facility, where she manages a $153 million construction project to upgrade the solids processing
facilities. She resides in San Jose.

VALERIE RADER SCHULTZ ’82 received her master’s of nursing in clinical leadership and systems management degree from Grand Canyon University in May. She is the director of Emergency Services at St. Mary’s Regional Hospital in Enid, Oklahoma. Valeries lives in Enid with her husband, Jerry.

FAROOQ ARJOMAND ’84 is chairman of Dubai’s Damac Properties after a previous stint as vice chairman of the developer. Damac has projects in the United Arab Emirates, Lebanon, the United  Kingdom, Jordan, Saudi Arabia, and Qatar. Farooq has worked at HSBC Bank for 17 years.

CAROL KELLY ’86 is Alumna of the Year for SPU’s School of Business, Government, and Economics. Carol had a trailblazing career with major companies, including Honeywell and Cisco, and she retired as a financial executive from Oracle in 2017. She volunteers in SBGE classes, mentors students, and serves on SBGE’s Executive Advisory Board. She and her husband, Bill, live in Seattle.

ALI BIN AHMED AL KUWARI MS ’87, appointed Qatar’s Minister of Commerce and Industry in 2018, was interviewed by The Business Year about his ministry’s efforts to turn COVID-19 economic challenges into opportunities to bolster Qatar’s economy.

BRENT SNYDER ’89 is a partner and member of the antitrust and competition practice at the law firm Wilson Sonsini in their San Francisco, California, office. Brent was previously the chief executive officer of the Hong Kong Competition Commission and was the Department of Justice’s highest-ranking antitrust criminal enforcement attorney.

XIN LUCY CHEN MEd ’90, MS ’93, vice president of Apple’s Claris Filemaker platform engineering, was named one of the “50 Most Powerful Women in Technology” in 2021 by the National Diversity Council. Xin and her husband, Yanan, live in Palo Alto, California.

KIMBERLY JOHANNESSEN HELLEREN ’91 published a children’s book The Day the World Stayed Home. During the pandemic school shutdown, her students sent pictures and videos about their activities at home, which she turned into paintings for the book. Her second book, Adventures in the Art Room With Mrs. H, was published last summer and is the first in a series teaching art elements to kids. She recently
retired after teaching at King’s Schools for 14 years. She and her husband, Leif, served on SPU’s Parent Council and live in Edmonds, Washington. They have two sons, Svenn and LARS HELLEREN ’21, who was SPU’s men’s soccer team goalkeeper.

STEVE WILLITS ’98 is a broadcaster for the Everett AquaSox minor league baseball team. His play-by-play announcing of the Aquasox’s 2021 road games was heard on KRKO (AM 1380 and FM 95.3). He is also the on-field emcee for the AquaSox during all home games. Steve lives in Brier, Washington.

DAVID CARNAHAN ’99 and his wife, Alise, wrote and released the song “Moving On.” They live in Edmonds, Washington.

SUMMER REYNOLDS KRAUSE ’99 is a licensed professional counselor who utilizes Seeking Safety, an evidence-based treatment for PTSD and substance abuse. She adapted its use for adolescents and became a trainer and consultant in the model. Summer also created a Christian faith-based guide to the model so ministry workers can better help people struggling with trauma or addiction with tools that are both biblically and psychologically sound. Summer and her husband, Dale, and two children reside in Camas, Washington.

MIRANDA ALBERTUS POWERS ’03 is the associate vice president of Student Life at Bethel University in Arden Hills, Minnesota. She has served in a variety of positions at Bethel since 2004. Miranda’s desire to work in a college setting began at SPU, where she was an RA and involved in Student Life. She and her husband, Brian, live in St. Paul, Minnesota, with their two children.

JULIE OLSON WHITE ’03 authored her first novel, EduCate, about a teacher navigating life amidst a pandemic and systemic racism. She is a high school and middle school language arts teacher and is currently teaching grades six to eight at Englewood Middle School, just south of Denver, Colorado. 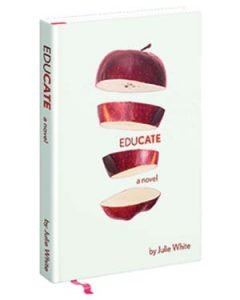 Julie and her husband, NATHAN WHITE ’03, (who met, appropriately, in chemistry class) have been married for 16 years and live in Englewood.

TIM SCHEUFFELE ’04, a financial advisor with Edward Jones, was featured in “40 under 40” in South Sound Business magazine. While an SPU student, Tim began his career in the financial industry at Wachovia Securities in Seattle. He and his wife, Beccy, live in Tacoma, Washington.

MEGAN MILLAR LUNDGREN ’06, a licensed marriage and family therapist, published Relationship Book for New Couples: Proven Strategies to Nurture Your Connection and Build a Long-Lasting Bond. Megan owns Relationships for Better, a counseling practice in Monrovia, California. She lives in Monrovia with her spouse, David.

DEBRA HUSS SEXTON ’07, who participated in gymnastics at SPU, owns FIT4MOM Carmel, a franchise that offers fitness classes for expectant and new mothers at locations around Carmel, Indiana. Debra lives in Carmel with her husband, Ryan.

KRISTEN POND OKABAYASHI MA ’10 is the new principal of schools for Hope Lutheran School and Seattle Lutheran High School. She has served as Hope Lutheran’s principal for the past 12 years. She and her husband, Scott, make their home in Seattle, and their son, Alex, is a current Falcon.

STEPHANIE MCBETH CURTISS ’11 is a recruiter for Northeastern University’s Seattle campus. She previously worked in admissions and student services at the University of Washington School of Medicine. Stephanie and her husband, WYATT CURTISS ’10, live in Seattle.

JOSHUA COOPER ’13 is Young Alum of the Year for SPU’s School of Business, Government, and Economics. He is a certified public accountant and manager who leads diversity and inclusion efforts at PricewaterhouseCoopers. Joshua is a member of SBGE’s Executive Advisory Board, and he also sits on the board of Disability Rights Washington. He is a founding board member of the Diversity, Equity & Inclusion Community of Practice. Joshua lives in Seattle.

LORI PETRAUSKI ’13, a field ecologist for the Alaska domain of the National Ecological Observatory Network, is a Community Science Fellow for the Thriving Earth Exchange Program. The cohort of fellows will launch collaborative, co-developed community science projects that produce on-the-ground impact through application of NEON’s data and resources. NEON monitors ecosystems across the U.S. to better understand how the environment is changing. Lori calls Fairbanks, Alaska, home and enjoys exploring the trails of interior Alaska in her free time.

JOSH JORDAN ’16, director of development for Washington State University’s office in Spokane, Washington, received the National Association of Athletic Development Directors Rising Star Award. A former SPU men’s basketball player, Josh knows firsthand the impact of philanthropic support on student-athletes. He raises funds for the Cougar Athletic Fund. During the pandemic, he closed a $4 million planned gift
and recorded 16 gifts in excess of $10,000 in five months. His parents, Jeff Jordan and SUSANNE DELANEY JORDAN ’86, both work at SPU. Josh resides in Spokane.

NICK VITELLARO ’16 co-launched a successful Kickstarter campaign in 2019 for The Hero’s Journal, a day planner that helps reimagine days and goals as a quest. For about a year, Nick worked his corporate job by day and fulfilled orders at night. He shifted his full attention to his side gig in 2020, and despite the pandemic, grew the business to more than $1 million in revenue. In February, Nick and his business partner launched a companion planner, The Hero’s Journal: Istoria Magic Academy, with another Kickstarter campaign — fully funded in nine minutes — exceeding their $25,000 goal by more than $275,000. Nick lives in Mukilteo, Washington.

ALI STEENIS ’17 is an e-text access specialist for the Disability Resource Center at Bellevue College in Bellevue, Washington. She resides in Seattle.

CAITLIN JOHNSON ’20 completed a summer internship with the United States delegation to the United Nations. Caitlin is in her final year of pursuing a master’s degree in international affairs in international politics and international management with a regional specialization in China from the University of California San Diego’s School of Global Policy and Strategy.

ASEDA BEKOE-SAKYI ’21 is the worship coordinator for The Inn, a college ministry of University Presbyterian Church in Seattle. During her final quarter at SPU, Bekoe-Sakyi wrote an orchestral arrangement of the worship song “Mile and Miles” by British artist Jonathan Ogden. Her arrangement will be available soon on streaming platforms.

EMILY BUSHA ’21 is a registered nurse at Mary Bridge Children’s Hospital in Tacoma, Washington. Her long history as a patient at Mary Bridge for a rare congenital condition led to her pursuit of a pediatric nursing career. She is thriving today, thanks to the team of experts who cared for her years ago. Emily resides in Port Orchard, Washington. 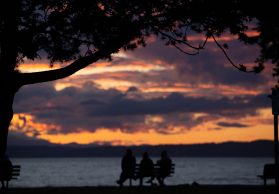