It took a career-ending heart operation for Victor Stime ’82 to finally get into Offshore Drilling.

With a wry smile, he explained the name of his floating dental clinic, a live-aboard 31-foot trawler yacht that he pilots north from northwest Washington to remote Alaskan waters every summer to help meet the dental needs of people in isolated coastal communities.

“I was going to name it the Molar Express.”

“I thought about this for many years,” he said from the aft deck, a covered spot where he can fold out a portable dental chair and lay out his custom equipment — including a portable X-ray machine and all the tools of a regular dentist’s practice. “I was going to name it the Molar Express.”

The bearded dentist smiles easily, and his eyes sparkle as he describes his work in remote communities. At first, however, his dreams didn’t unfold quite the way he had planned. He studied archaeology, linguistics, and Greek at Seattle Pacific, and had Indiana Jones aspirations before diverting to studies in biology and dentistry after graduation.

“I wanted to work with people,” he said.

For 29 years, Stime worked as a dentist in a rural community north of Spokane, filling cavities, drilling root canals, and cleaning teeth. He built his clinic literally from the ground up, sharing a brick building he and his physician brother constructed together. Several generations enjoyed care from the man they called “Painless Dr. Stime.”

But just over two years ago, he found himself on his back in Ohio’s Cleveland Clinic, undergoing surgery to replace a heart valve. At the time, he and his wife, Christi, felt certain this life-changing event would mark the end of his career — or at least his career as they had known it. So when another dentist offered to buy both the practice and the building, the deal was quickly finalized.

“I never questioned whether it was God’s timing,” he said. “It was definitely time to do it. And this opened up brand-new avenues for what I could do.”

As he recovered from the surgery and regained his strength, he also slowly discovered new ways to work — filling in for other local dentists who were sick or on vacation and caring for the dental needs of inmates at the Spokane County Jail one day a week.

Selling the practice opened the door for the Stimes to buy their yacht. But that had actually been a long time coming, since both enjoyed the water from an early age.

Over the decades since they married, the Stimes often spent family vacations afloat, renting a boat to explore the waters of northwest Washington, British Columbia, and Alaska for a few weeks at a time.

Stime knows the way well when he guides his craft north from its berth in the border town of Blaine, Washington. A week up. A week back. And in between, about a month of seeing patients in remote Alaskan coastal inlets, from the Native American village of Metlakatla to Thorne Bay, Port Protection, Coffman Cove, and Meyers Chuck. The circuit delivers basic care for patients who would otherwise have to trek many miles by boat or floatplane to see a qualified dentist.

Some of the settlements have usable docks, while others require Stime to anchor offshore, so patients reach them in a dinghy. A few settlements don’t offer dockside power, either, so Offshore Drilling carries its own generator. Which means …

“Your sterilizer takes energy,” explained the dentist, “and your compressor. And your computer. So you have to pick and choose, and sometimes you just kind of have to alternate. Electricity has been a big issue.”

So even if some procedures sometimes take a bit longer, that’s all part of the adventure. While he can’t offer root canals, crowns, or bridges, Stime does provide all the basics: fillings, cleanings, exams, fluoride treatments, sealants, extractions. A portable X-ray machine ties directly to his laptop, something that wasn’t technically possible only a few years ago.

And while the Offshore Drilling doctor doesn’t advertise free services, it all depends.

One of his biggest surprises last summer — Stime’s first year in Alaska as a floating dentist — was when international crew members from some of the cruise ships showed up at the boat for treatment.

One of his biggest surprises last summer — Stime’s first year in Alaska as a floating dentist — was when international crew members from some of the cruise ships showed up at the boat for treatment.

“They’re from Ghana, or from a lot of different countries,” he explained, “and they would say, ‘we don’t have time to do dentistry, but we have six hours off.’ So we had a lot of patients. That was a big surprise. We had no clue about that.”

And they have no clue what they’ll encounter at each new stop. “They,” in this case, being Stime and his nephew Luke — who has spent his summers growing up with Uncle Vic and Aunt Christi, and who now serves as all-around “dental deckhand.”

Luke is well equipped for his role. He’s an experienced mariner and fisherman, handy around all things that float. During the year, he’s an assistant manager with the Tofino Harbor Authority.

“I get to hang out with my uncle, and we get along really well,” he said. “I can help him out, and I get to have a vacation in Alaska every summer.”

Well, it’s a working vacation. Stime describes it as “partly adventure, partly a new lease on life, something that’s totally different, good for people, and enjoyable.” He’s not in this just to make a profit, he said.

“We try to visit churches in every community, introduce ourselves. They know I’m a Christian dentist, not just a dentist.” —Victor Stime

“We’re not just out here trying to make money. We’re doing this for the love of Christ,” he said. “We try to visit churches in every community, introduce ourselves. They know I’m a Christian dentist, not just a dentist.”

Luke, whose parents have served as Wycliffe missionaries, recognizes that fine —or perhaps fuzzy — line between business and ministry.

“The charitable aspect of it,” he said, “Vic has not wanted to play up at all. It’s not his personality to do that. I really appreciate that. We show up, and it’s not showing up as a charity. It’s peer-to-peer. They’re getting a great service, and they’re paying a little bit for it.”

Between keeping the boat and its systems safely running, Luke has a close-up view of his uncle’s daily work. What is it like for residents of remote Alaskan villages to step onto a 31-foot yacht to have their teeth worked on?

Luke said his uncle is a “really hilarious guy” who is always “very sweet to people.” 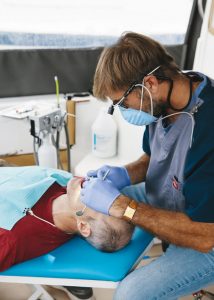 “I haven’t seen any patient ever come in stressed out about what’s going to happen, and then leave also stressed out,” he said. “When they leave they’re laughing and thanking him, and he’s cracking jokes. He has a very calming effect on people. He’s just a great, easygoing guy to be around.”

From longtime patients and friends to employees and co-workers, others echo Luke’s perspective. Jay Schuman has worked at the Spokane County Jail for more than 30 years, and has provided security for the visiting dentist, one day a week.

“He is an absolute joy to work with,” said Schuman. “The guy is such a professional, but at the same time, he’s lighthearted, easy to get along with, easy to talk to.”

Schuman added that he always looked forward to Mondays, the day Stime normally worked at the jail. “I come to work, and I know what I’ll be doing, and I know that things are going to run smoothly. He’s very well organized, one heck of a good guy.”

Julie Glumm, former front desk employee at Stime’s practice and a patient of his, said that Stime is “just hands-down awesome, all the way around.”

“Dr. Stime was the type of guy who would actually come in on the weekends and days that we weren’t working if a patient contacted him,” she said. “He would come up to the office on his time off and take care of a patient’s needs. That’s just who he is.”

Longtime friend and patient Dagfinn Melby called the doctor “probably the most capable person I have ever known. There isn’t a thing he can’t do.”

Accolades aside, Stime faces new challenges from year to year. During year one in Alaska — the summer of 2017 — he and his nephew faced a number of logistical and technical challenges, from water in the boat fuel to mechanical breakdowns. Mindful of regional regulatory differences, the doctor had to carefully address specific Alaskan legal requirements for dentists there. And they were visiting every village for the first time.

“Last year we had no contacts, no nothing,” said Stime. “I’d called everybody, I called mayors, and asked if this would be received well, and they said ‘oh, yeah, definitely.’ So when we went up there we just started meeting people, shaking hands, passed out flyers, sat down and waited for someone to show up. Some days we’d see two, some days we’d see three, and that would be about it.

In between patients, he and Luke always hope they’ll have a little downtime to relax and catch their next meal.

“But this year, we know a lot more people,” he said, noting that he already had a list of a half-dozen repeat patients to see on the trip. “We’ve done a lot of advertising in advance. We’ve got a big Facebook presence going on. There’s less stress this year.”

And there’s also more time to go fishing, another of the doctor’s passions. In between patients, he and Luke always hope they’ll have a little downtime to relax and catch their next meal.

“I love navigation,” Stime said from the gently rocking rear deck of Offshore Drilling. “I love fishing. I love dentistry. I love boating. I love the outdoors. You put it all together, what do you get?

This story first appeared on pages 16–23 the autumn 2018 issue of Response with the headline, “Dentist on board.” Photos by Lindsey Minerva. 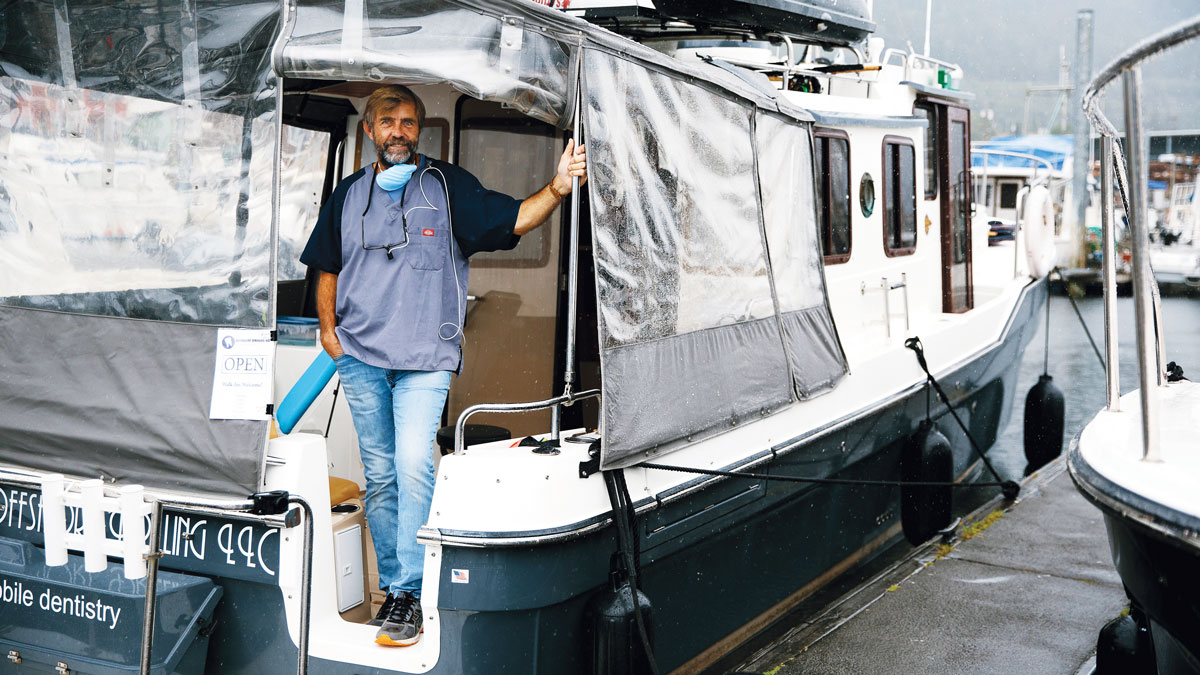 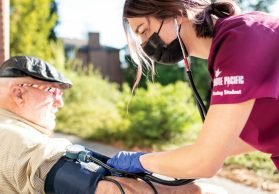 Bringing healing to the table 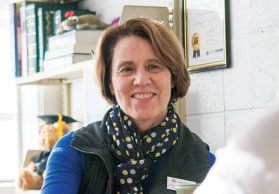 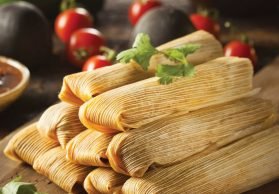