A Conversation With Missionary Kenneth Bae

735 days. That’s how long Kenneth Bae, a U.S. missionary, was held by the North Korean government. He was detained after accidentally bringing a computer hard drive into the country that contained files about his missionary work and Western media images of the 1994 to 1998 North Korean famine.

Sentenced to 15 years of hard labor after his North Korean trial found him guilty of these “hostile acts,” Bae spent time in a work camp, and in hospital care for health issues, before he was pardoned and released in November 2014.

Bae told his story in Seattle Pacific University’s chapel service on October 11. He then spoke with Response about his call to mission, how he kept faith during his imprisonment, and his hopes for the future.

How did you come to know Christ?

I don’t know exactly when I gave my life to Jesus, maybe around 14 or 15. I was in youth group one morning, listening to the sermon, and realized everything kind of made sense.

I grew up in Seoul, South Korea. My grandmother, a very faithful Christian, took me to church until I was 11 or 12. Then, one by one, our family started attending church. After a few years, almost everybody in our family, including my cousins and our extended relatives, all became Christians.

When did you feel God calling you to be a missionary?

Right before I moved to the U.S., I went on a youth group retreat where the speaker asked us to pray about God’s vision for our lives. I felt one word: shepherd. Just one word. I thought maybe God had called me to some sort of ministry in the future, but I had no idea what that would looked like.

After high school, I attended a retreat organized by Campus Crusade for Christ. One day, Dr. Bill Bright was challenging people to embrace China. I felt like God was speaking to me. So I heard, when I was 16, shepherd, and around 19 or so, I felt the calling from the Lord to be a missionary to China.

The first time you set foot in North Korea, what did it feel like?

My dad was born in North Korea; at the time it was only one Korea.

I had a longing to visit, or to just find more about North Korea. While I was in seminary, Covenant Theological Seminary in Saint Louis, I read how more than three million North Korean people starved to death in a severe famine. I had a longing and compassion for the people, but I never felt that I had a special calling for them, because I thought my calling was for China.

When the Lord opened the door for me to visit North Korea for the first time, I kind of felt like I’d come home. I thought, “These are my people.”

They’re just the same people as us, except they don’t know the Lord, because there’s no way for them to hear the Gospel.

During my first month of detention, one of the officials said, “I’ve heard about God before, but I’ve never heard of Jesus. Where does Jesus live, in China or Korea?”

He was born in Pyongyang; he went to college in Pyongyang. A hundred years ago, Pyongyang used to be known as Jerusalem of the Far East. They had more churches and more Christians in Pyongyang, than any other city in Asia. But now, name of Jesus has disappeared. They’ve never even heard about Jesus before.

You were in custody for 735 days. Were you allowed to have a Bible?

Then suddenly, I found myself in the labor camp. I had to work from 8 in the morning until 6 in the evening, six days a week, working in a bean field. Later on in the winter, I had to shovel coal into the furnace — and I was covered with the coal ash all the time — and shovel snow, dig holes, and carry rock.

I had to take one day at a time, and put on the full armor of God daily in the morning, and read the Bible, and pray, and worship, asking the Lord to help me to get through each day.

Every day, I’d been praying, “Lord save me, send me home, bring me home.” After almost a year, I found out that an envoy from the U.S. was coming, but it was canceled at the last minute. A week later, a special envoy from the White House was able to visit me for five minutes only. Then I got the letter from my mom, telling me, “You need a faith like Daniel’s three friends. God is able to save us, but even if he does not, you need that kind of faith.“ When she said that, then I realized I was not going home. So I had to wonder and ponder, “What if God wants me to stay here — would I be able to obey him?”

So finally, I said, “Lord, you know my heart — I want to go home. But not my will but your will be done. I give up my right to go home.

The Lord spoke to me and said, “Kenneth, do you love me more than these?” I said, “Lord, I love you,” and he said, ”Then feed my lambs, take care of my sheep.” At that moment, I started to see all the people around me, more than 30 guards and staff, as God sees them: the lost sheep that he’s sent me to find.

When you were in prison, the labor camp, and the hospital did you tell people about your faith?

I realized that I could not speak to them about Jesus, because it would get them in trouble. I could not ask them to accept Christ. They only option that I had was to live out the Gospel. I realized I might be the only Jesus they would ever get to see in their lives.

So I said: “Lord, teach me how to live like you, daily, to be able to demonstrate your character, and your love to people, so that when I leave, they can see the evidence, and get a glimpse of Jesus — so they will remember Jesus rather than me.”

That was my prayer. After I prayed that, every day, I tried to live as a friend and shepherd, and trying to demonstrate how Jesus would live.

What sort of questions did people ask you?

They’d usually call me “103,” my inmate number. When they were alone, they would say, “Pastor, can I talk to you?” I started doing family counseling, marriage counseling, premarital counseling, and that sort of thing things. I started becoming like a friend and a shepherd.

In the hospital, I was able to go on short walks with guards, and I was able to talk to them. This is where a lot of meaningful conversations started.

How did your health fare while you were in prison?

I was in the labor camp for about three months, and I lost about 60 pounds altogether. I was treated in the hospital, and it was actually pretty comfortable. I’d just sit, but I had to watch the TV, the propaganda channel, every day. I learned quite a bit about North Korea, through their media — how they think, what they think, and so on. When I was in back in the labor camp, I was hungry, I was tired, and I was craving food. One day, I was craving Hawaiian chocolate with macadamia nuts. I also wanted a Kit Kat, beef jerky, a protein bar, and mixed nuts. I thought about it, and then forgot.

When my mom came to visit me months later, she opened her bag, and the first thing she took out was Hawaiian chocolate with macadamia nuts. The second thing was a Kit Kat bar, then beef jerky, protein bar, and mixed nuts — exactly the five things that I craved that one Sunday morning in the labor camp. I remembered that. I didn’t call her, I didn’t write to her — there’s no way she would know that I was thinking about those things, exactly the order that I was thinking about them. That was one of the ways God showed me he was there.

For college students — or anyone trying to discern their calling in life — what insight would you offer?

Search for God’s heart and God will reveal himself to you. When you are given a calling, embrace it. Fix your eyes on the Lord, continuously.

If someone is feeling called to missions, what would you tell them?

What I found, through my 735 days in prison, is that Jesus is worth living for, carrying out a calling for — worth even going to prison for. If someone really feels led to the mission field, and then just ask God to lead you, one step at a time.

If it is God’s calling, if it’s God’s will, then we just need to trust. His ways are better than ours, he’s bigger than us, so we need to trust in the Lord and in his will.

What is your hope for the people of North Korea?

The first time I was in North Korea, the Lord spoke to me, so I knew that God wanted to use me as a bridge between North Korea and the rest of the world.

I made a commitment to the Lord, even though I was called to China, the Lord really wants me to be a bridge between North Korea and the world.

Why did you title your book Not Forgotten?

Because they have no access to the gospel, the name of Jesus has disappeared. So, we as Christians need to stand together with them, remember them, and pray for them.

I think the Lord will use prayer. Because the Lord reminded me that hundreds of thousands of people prayed for me while I was there — that is the reason why I was able to come home. So when churches around the world together and pray for the people in North Korea, they will be able to hear the Lord’s name, and they will come to Christ.

The people of God have not been forgotten by God. We should not forget the people in North Korea. 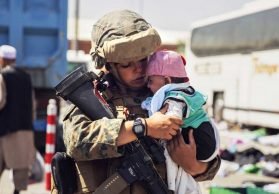 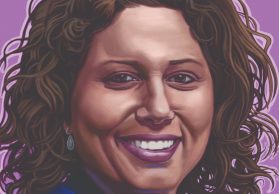 Business on purpose: An interview with JoAnn Flett