A champion of survivors: 2017 Medallion honoree Sheila Houston commits her life to ministry

For her ministry and her work in support of trafficking survivors, Sheila Houston ’02 was honored with the 2017 Medallion Award at SPU's Homecoming.

Founder of Rare Coins Ministry Sheila Houston ’02 will soon hold a doctorate of ministry and a master’s certificate of transforming spirituality from Seattle University, completing an educational journey that included dropping out of high school at age 16.

Once a teen in an abusive marriage and forced to become a sex worker, Sheila’s life changed forever when she walked into a church one Sunday morning. “I sat there and listened to a message about Jesus,” she remembers. “I sat in that church and cried because I realized it was Jesus that I was looking for all my life.”

Years later, after remarrying and raising a family, Sheila returned to school, graduating from Seattle Pacific University in 2002. She added an executive master’s degree in nonprofit leadership and certificate of pastoral leadership from Seattle University. She is an ordained elder in the Free Methodist church and an associate pastor at Living Hope Christian Fellowship in Renton, Washington. For her ministry and her work in support of trafficking survivors, Sheila was honored with the 2017 Medallion Award at Homecoming this year.

Sheila is the founder of Rare Coins Ministry, a nonprofit offering mentoring, housing, and counseling referrals to women trying to leave the sex trade. She speaks to churches and organizations about effective ways to support trafficking survivors and young people at risk for commercial sexual exploitation. She has served on Washington’s Statewide Coordinating Committee on Sex Trafficking, and is a sought-after speaker and consultant.

“I didn’t realize how much of this work was going to bring healing and change for the women, for the community, and for those working with this ministry,” says Sheila. “It was prepared by the Lord.” 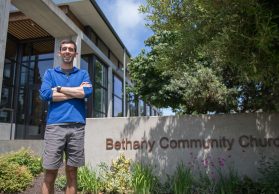