SPU Vice President for Student Life Jeff Jordan shares his best advice on how parents of college students can relate to their children when they return home for the holidays. Amanda Stubbert: You’re a parent of a college student yourself. Can you give us some advice about having your students come home for the holidays and they’ve been away; they’re building this new identity and then they’re coming home as a slightly new person. How do you, as a parent, respond to that?

Jeff Jordan: It is a journey. I mean it’s a journey, especially when you have a college student who is learning things that you don’t necessarily know what’s going on in a classroom, or in a residence hall, or other things. So I think being open to hearing and listening. I think the first thing is just being present, finding some time where it’s just not the TV on or other distractions. It might be going out for a cup of coffee or for dinner, just maybe one parent to the student or both parents with the student, with your child. Just being present with and allowing a conversation to happen, I think that’s really important. Asking some open-ended questions and then … this is difficult, not being judgmental. I mean, just kind of listening and saying, “Well, tell me more,” as opposed to saying, “Well, I’m not sure I agree with that,” or other things.

Listening more as much as you can, and allowing the fact that the journey is not done; even though they may be 18 to 22, and frankly, later in life, as well. I mean, I’m a little bit older, but even with my parents, until they passed away, there were moments where I’m still not sure that they knew everything about what I did in my job, let alone what other different aspects and things that influenced me as well. The appreciation of my parents in regards to allowing for me to speak was really helpful. It didn’t happen all the time, but it certainly was the piece I think where they were … especially later on, I think they said, “Okay, we need to kind of sit back a little bit and listen.”

Now with both a college student and one who now is out in the work world, newly married, I mean, there’s another aspect of journey that my wife and I need to just sit back and listen, be present with, spend time with, as much as we can and keep asking good questions and listening without judgment as much as possible. And seeing how it keeps on unfolding because certainly, I’m not a finished project. God still has work to do in me, but like I said, plenty of rough edges. I’m sure that my kids do as well. We keep on needing to understand and have patience and, frankly, grace.

Amanda: And patience and love. So I’ll end this one with my father’s favorite quote: “I left home at 18, sure my father knew nothing. I returned home at 21, amazed at what he’d learned in three short years.” In September you dropped your student off at SPU, and soon he or she will be home for Christmas. Your student will have enjoyed some newfound independence, made new friends, and — thanks to classes and professors and experiences with peers — started questioning some of the ideas and routines once taken for granted. So how should you approach these moments when your young adult reconnects with the familiarity of home?

A writer for our parent e-newsletter, In the Loop, asked for advice from parents who have been through this transition before. Many of their answers overlapped, from “let them sleep” to “don’t expect to see them.” They all agree that seeing their student grow during this time is special.

The following is some of their advice:

“Don’t make plans assuming their involvement. Despite being ‘home on break,’ they are still very connected with the community in which they are now a part and will very likely have their own plans (which may not include you)!”
— Gerard Duguay

“Let’s face it, they will always be your ‘kid’ … but our students have now had a few months of functioning independently as adults, making their own decisions, managing to obtain food and clean laundry to some degree or another, and calling the shots on their own bedtimes. It can be so hard to avoid slipping back into former ways of parenting, possibly including telling them what your opinion is about their decisions and actions. Try to resist giving your opinion unless asked for it! Instead, keep the conversation going by asking open-ended questions! Odds are high that they are learning from natural consequences, so instead of telling them that they have terrible sleep habits (99.9 percent of them do for a while), ask them how they did with midterms and finals, what they learned about themselves in the process, and what they’ll do the same or different next quarter!”
— Heidi Monroe

“You may not see your dearly missed son or daughter because he or she will be busy catching up with high school friends. Picturing long conversations over the dinner table? Time to play a board game or two? Maybe catch a movie? Well … not so much.”
— Alison Estep 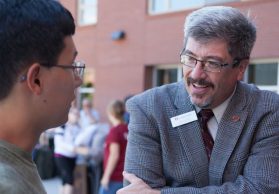 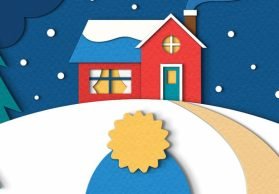 Home for the holidays: What to expect when your student comes back from college