As has become their custom, the Seattle Pacific women’s soccer team advanced to postseason play this autumn, earning a spot in the Great Northwest Athletic Conference Tournament in Portland.

The Falcons made it by finishing third in the regular-season standings with an 8-4-0 record and 10-7-0 overall. They came up against defending national champion and arch-rival Western Washington University in the first round, ultimately falling short by a 2-0 score. That brought their season to an end.

SPU picked up a major postseason honor when Sophia Chilczuk was named the conference’s Freshman of the Year.

The men’s soccer team put together an early-season four-match winning streak, all against strong non-conference opponents. They began their GNAC schedule by battling to a 1-1 tie against preseason favorite Simon Fraser, which came into that game ranked No. 2 in Division II.

SPU was in the running for an automatic qualifying spot to the NCAA soccer tournament up to the final night of the season. But in a winner-take-all game, Simon Fraser grabbed that berth with a 2-0 win. The Falcons finished 11-5-1 overall, 7-4-1 and second place in the GNAC.

Under the direction of first-year coach Abbie Wright, Seattle Pacific scored several dramatic volleyball victories through the first half of the season. In eight of their first 16 matches, the Falcons went to a deciding fifth game, and put six of those into the win column.

Heading into the final weekend of the season, SPU had 13 wins, the most since 2013.

The women’s cross country team had strong races throughout September. At the Charles Bowles Invitational on September 30 in Salem, Oregon, they finished ahead of Point Loma Nazarene University, which was ranked 24th nationally at the time. At the GNAC Championships, senior Mary Charleson took second, and led the team to a third-place finish.

On the men’s side, senior Ben Halladay was a top-15 finisher at the Sundodger Invitational. He also made the top 10 at the Charles Bowles Invitational and the top 25 at the Western Washington Classic. The Falcons were eighth at GNAC. 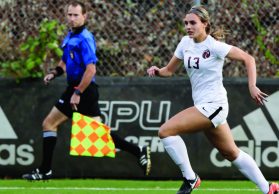