The Seattle Pacific women’s soccer team was right back where it belonged this fall: playing in the NCAA soccer tournament.

After a one-year absence, the Falcons earned a place in the West Regionals for the 15th time in the past 16 seasons, going up against Great Northwest Athletic Conference rival Concordia-Portland in the first round. Kasey Reeve scored a goal for SPU, but the Cavaliers, playing on their home field, wound up the victor by a 2-1 score on November 8.

Seattle Pacific still finished with a solid 12-6-2 record — and that had its rewards. Senior Julia DeVere was named the GNAC’s Defender of the Year, the third time a Falcon player has earned that honor. She and sophomore forward Sophia Chilczuk were named to the All-GNAC first team.

The Falcon cross country runners came up with some outstanding performances at the GNAC Championships and earned the right to race at the NCAA West Regionals. Freshman Kaylee Mitchell finished third and earned GNAC Freshman of the Year honors, and that helped the SPU women take third in the team standings. On the men’s side, sophomore Elius Graff made the top 25 and helped the Falcons place seventh.

Senior Symone Tran set an SPU volleyball record for most assists in a career. As she headed into the final week of the season in early November, Tran had racked up 4,049 assists. The old record, which had stood since 2006, was 4,009 by Jenna Von Moos, who played from 2003 to 2006.

The men’s soccer team went through a roller coaster of a season. The Falcons went 8-11-0 overall. Sophomore forward Titus Grant, who scored 13 goal for the year, earned a place on the All-GNAC first team. He was the first player with a double-digit goal total since 2011, when Tyler Shultz netted 16. 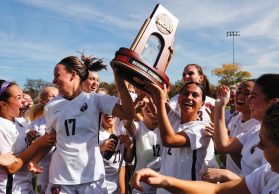